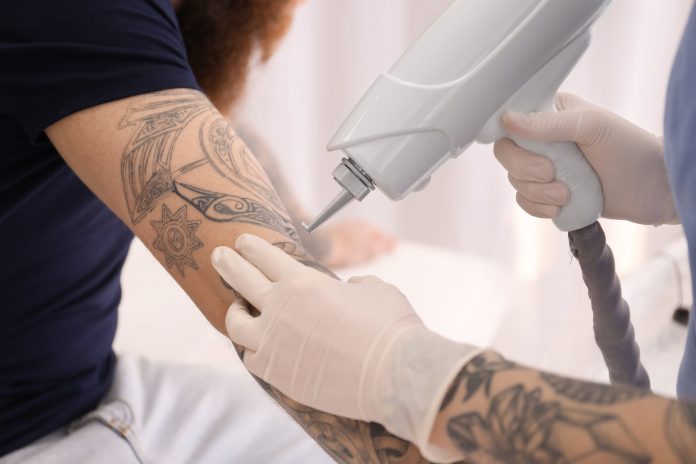 Nowadays more and more people consider getting their tattoos removed. The reasons can vary, like having some embarrassing tattoos or disliked by present lover. While dealing with this problem, what they care more about is the safety of tattoo removal.

So, as the de-inking process has evolved in recent years, is tattoo removal safe now? The answer is yes. There are a number of steps you can take to insure the safety of your tattoo removal. So besides wondering, “Is tattoo removal safe?” You probably should first know possible shortcomings of some common methods.

We’ll list the concepts and shortcomings of common methods below:

In the past there were two techniques known as dermabrasion which involves scraping away or sanding down the skin and salabrasion with a salt solution that is rubbed into the skin, heated and scraped away. In both scenarios, scars are likely to be left behind, although the tattoos may be removed.

By surgical removal a tattoo is removed by cutting the tattooed skin and sewing back the surrounding skin. This is also likely to leave a scar.

This is a form of body modification itself, kind like tattooing and piercing. It’s pretty much like a chemical peel removing the skin surface, that an acid solution is used to remove the tattoo in this procedure. The scar will eventually grow in its place covering up whatever ink remains.

It’s also known as cryotherapy which is also used for tattoo removal. This procedure freezes and burns the tattooed skin with liquid nitrogen, which is commonly used to treat warts and other skin lesions.

An ‘active’ laser tattoo removal system is quality-switched, or Q-switched, lasers, which has become widely used in the last decade and proven to be the most effective way in the present market. Active Q-Switched (AQS) laser is considered the gold standard treatment by dermatologists for effectively removing almost all tattoo colors with minimal risk of scarring. The shortcomings are that it will not remove certain colors like yellow or light blue and not suitable for people prone to scarring problems e.g. keloid scarring.

P.S.: Sometimes people as the consumer do not know the differences between an active and passive laser and they may be charged the same price of a medical grade active Q-switched laser to pay for a passive one.

By contrast we seem to be able to conclude that AQS laser treatment is safer, but we need to know there is no great treatment and it doesn’t mean it’s foolproof. The laser treatment works differently for all patients, depending on the contrast between the ink and skin. The greater the color contrast, the easier the removal will be. For example, black ink on light-skinned people is the easiest to remove, while fluorescent colors (mentioned above, yellow, purple, green and light blue) are nearly impossible to remove. So if you have tattoos with these colors, we suggest you do not remove it using laser treatment.

For more crucial facts you should know about laser tattoo removal, like pain, allergic reactions and side effects, you can refer to 10 Must Know Facts About Laser Tattoo Removal.